This is an update about Janet’s rehabilitation with MOTIONrehab® following her suspected stroke 15 years ago.

Vicky our Therapeutic Exercise Instructor started to work with Janet following a chance meeting at the supermarket in 2015. When Vicky met Janet she was wheelchair bound and could not get out and about. She was finding it difficult to transfer and manage basic tasks. Her core stability and strength were extremely limited on both sides because of her stroke and reduced levels of activity. She was also experiencing low mood and was reliant on her partner and carer to do all household tasks and self care.

After a lot of hard work gradually her strength began to improve and she began to do tasks like putting washing in herself. We started to involve the paralysed side further working across the body’s sling systems to elicit activity. There were some inconsistencies in her ability and reactions so when we reached a point where she could control basic movement. Janet then had a physiotherapy assessment with Sarah.

The combination of working with a Therapeutic Exercise Instructor and a Physiotherapist has been the best approach for Janet. The expertise in exercise therapy provided by Vicky and movement dysfunction from Sarah has given a targeted and functional approach to her rehabilitation. Sarah has also incorporated her wider knowledge of rehabilitation technology to support the rehabilitation programme. Sarah organised a smaller ankle foot orthosis to replace the calliper and suggested she could benefit from FES. Janet began with basic stimulation of the quadriceps muscles and has been progressed to self supporting standing work! Janet now wears her FES to help lift her foot and bend her knee when she is walking, which has improved her walking pattern and strength.

The major breakthrough was being able to get up and down the 2 large steps in and out of her house holding onto a rail and using her stick. This meant Janet could get outdoors by herself for the first time in 15 years! Janet has managed to walk 2 km with her stick and has spent the summer exploring the outdoors on her own two feet (with big smiles all round)!

Unfortunately Janet has experienced some knee problems on her non-stroke side but is again managing this with exercise and strength training and is determined this will not stop her or limit her independence.

Janet continues to be determined to achieve her very best and continues to integrate exercise into her everyday routine.

“I never thought this was possible..thank you so much to Vicky for pushing me and making me believe in myself!” 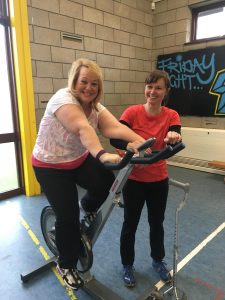