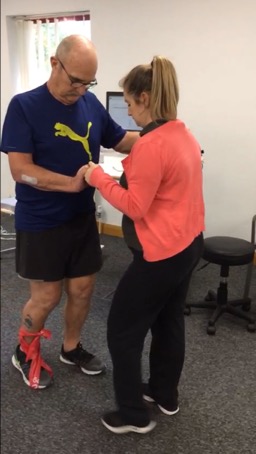 Gary and his wife were visiting the UK on holiday from their home in Perth, Australia. On the 9th June 2018 Gary had a large stroke, affecting the left side of his brain. Gary was admitted to a local hospital with weakness down the right side of his face, difficulties with his speech and weakness throughout his right arm and leg.

Gary was discharged from his local hospital on the 14th August 2018. Due to the difficulties Gary had with standing, transferring and his inability to take steps or walk getting home to Australia was not immediately possible.

Gary’s wife found MOTIONrehab online and asked if we could help. Gary came for an assessment for the Intensive Neurological Rehabilitation programme at the MOTIONrehab clinic Leeds.

Gary was found to have difficulties with weakness in both his right arm and leg. He was unable to use his right arm or hand for any day to day activities. The weakness around the shoulder and his inability to move his arm also affected his balance. Gary was only able to stand up with support and he was not able to put weight through his right leg. He also needed to get in and out of his wheelchair or on and off the toilet. 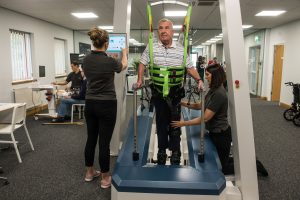 After having his initial assessment, Gary started rehabilitation with MOTIONrehab on the 28th August 2018. His programme was tailored to target his specific problems. The MOTIONrehab intensive rehabilitation programme consists of four hours of therapy each day, five days a week, for a period of 4 weeks. He spent one hour a day receiving ‘traditional’ one to one neurological physiotherapy or neurological occupational therapy. The remaining time was spent using the state-of-the-art robotics and sensor-based technology from Tyromotion and Thera-Trainer.

MOTIONrehab is the only neurological rehabilitation centre in UK with all of these particular devices, giving the clinic International Reference Centre Status for treatment, teaching and research. By using this technology Gary was able practice high repetitions of movement which is critical to promoting the re-wring of the nervous system known as neuroplasticity.

As well as manual walking, Gary practiced his walking on the Thera-Trainer LYRA and achieved an increase in cardiovascular fitness as well as an improved gait cycle; walking a of distance of 1104m as shown in Graph 1. 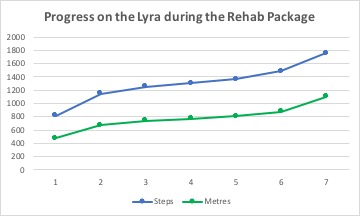 Chart showing progression in distance and number of steps.

Working with the MOTIONrehab Gary identified the goals he wanted to work on during this rehabilitation. He wanted to be able to stand from his wheelchair and step around to another chair [or the toilet] without any help. He also wanted to be able to walk about 10m with a walking stick and a support to manage his drop foot [weakness around the ankle which makes lifting the foot when stepping difficult].

Gary was very motivated to improve his independence and found his strength and fitness improved which also improved his fatigue.

At the end of his programme Gary was able bend and straighten his fingers and wrist flexion and managed to be able to grab items successfully. He also started to show the ability to open his hand and fingers to let go of objects and was given an exercise programme to continue to work on this.

Gary showed the most progress with his standing and walking. He worked hard on stepping and also tried using with a functional electrical stimulation (FES) device which assisted with foot up position when he was stepping.

At the end of his rehabilitation programme, Gary was able to stand up and step around 90°. He was able to walk with his stick short distances by himself and about 50m with a little help.

Most importantly Gary was able travel on a regular flight back to his home in Australia on the 27th September 2018.