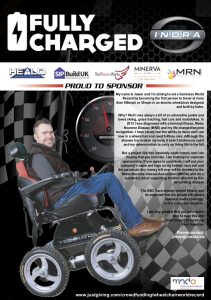 MOTIONrehab client, Jason is aiming to set a new Guinness World Record by becoming the first person to travel at more than 90kmph or 55mph in an electric wheelchair designed and built by specialist electrical vehicle firm, Worcestershire-based Indra

Jason, a self-confessed adrenaline junkie loved skiing, grass tracking, fast cars and motorbikes. However, in 2013 he was diagnosed with a terminal illness, Motor Neurone Disease (MND) and his life changed beyond recognition.  He has slowly lost the ability to move and is now in a wheelchair and needs fulltime care. Jason says

Although the disease has broken my body it hasn’t broken my spirit and my determination to carry on living life to the full.

Jason has already undertaken a number of daring challenges since his diagnosis including abseiling off the Humber Bridge and climbing Mount Snowdon.

A project like this inevitably costs money Jason is hoping that businesses can help him to achieve his goal and is looking for coporate sponsorship. Those who contribute will have their company’s name and logo on Jason’s helmet, race suit and the parachute. Any money left over will be donated to the Motor Neurone Disease Association (MNDA) who do a wonderful job of supporting families affected by this devastating disease.

Mrs Liversidge said a World Record would be a legacy for their two daughters, Lilly, six, and Poppy, seven.

“It will be something they can remember him for,”

Jason’s story has won attention from the BBC who have already started filming and its expected that the project will attract national media coverage.

If you would like to support Jason in this incredible world record breaking challenge, please contact Jason directly by emailing:  [email protected]