This is Rowland’s Story.
In July 2018, Rowland was out playing golf when he collapsed with a weakness to his right side. He was taken by ambulance to Hull Royal Infirmary where he was diagnosed with a stroke. He remained on the Stroke Unit for a number of weeks.

During this time, Rowland became unwell with a pneumonia which required antibiotics. He also spent much of his time in bed as his cognitive and physical state remained low.  Rowland was offered physiotherapy, but this was limited due to his reduced cognition, awareness and compliance. It was felt he had minimal rehabilitation potential. Rowland was discharged to a nursing home for 24-hour care near to his family home.

Rowland and his wife first made contact with MOTIONrehab in October 2018. An assessment was undertaken at the nursing home to discuss if treatment/rehabilitation was possible. A number of issues were identified.

MOTIONrehab worked in partnership with nursing and therapy staff, visiting him in the nursing home. Therapy involved working on sitting balance on the bed, stretching his arms and legs, building up strength to sit out in a chair, and standing with support.

With the physiotherapy received from MOTIONrehab, Rowland demonstrated improved rehabilitation potential. Therefore, Rowland was transferred to a rehabilitation hospital for more therapy input.

While in the rehabilitation unit, he continued to improve his standing and started stepping with support from therapists. Rowland was then able to be discharged home in March 2019, with carers equipment to help him move.

After discharge home, Rowland continued to receive regular physiotherapy with MOTIONrehab. The therapy focused on transfers, standing, walking and increasing independence. He was also provided a home exercise programme which was completed with his wife and carers. Over time, Rowland progressed to walking short distances with a tripod stick and assistance.

MOTIONrehab’s neurological physiotherapy sessions also consisted of working on car transfers so he could access the community. This enabled Rowland and his wife to attend the MOTIONrehab Clinic in May 2019.

Rowland continued to make steady progress with regular rehab and support from his wife. Unfortunately, during this time Rowland had a minor setback, after experiencing a seizure. He was reviewed in the hospital and after a few weeks was able to return to physiotherapy sessions.

In March 2020, there was another unfortunate set back with the onset of the Covid-19 pandemic. Government recommendations  meant that services at MOTIONrehab were suspended. Despite this, Rowland and his wife continued with his rehabilitation programme, completing a daily home exercise programme provided by MOTIONrehab.  With the assistance of people in his support bubble Rowland was able to continue standing and stepping practice.

In June 2020, MOTIONrehab were able to welcome Rowland back to MOTIONrehab. Fortunately, thanks to his wife and the support around him encouraging his exercise regime he had not lost the gains made with his previous therapy input.

Rowland has continued to attend MOTIONrehab to work towards his goals.

Rowland kindly volunteered to help with the staff training on the devices and has taken to robotic training like a “duck to water”!

When using the devices Rowland can perform large number of repetitions of movements needed to promote his recovery and accelerate his outcomes. Rowland responds really well to the feedback the devices give him on his performance and is continually motivated to improve his scores on a range of challenging games designed to support his rehabilitation of both his arm and leg. He even used the Diego, arm robot to help him play his guitar with support of one of the MOTIONrehab team.

The technology allows MOTIONrehab to tailor treatment plans to involve Rowland’s interests, such as music and driving to a much greater extent, compared to traditional therapy approaches alone.

Rowland has achieved so much and continues to challenge himself.

And so, the journey continues………….
Rowlands next goal is to walk unassisted into the pub and have a pint (we’ll be with you for that one!!!) 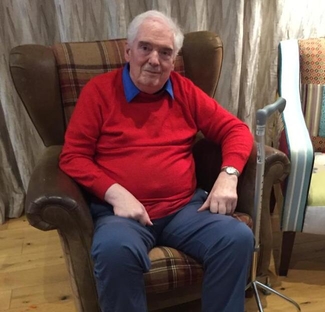