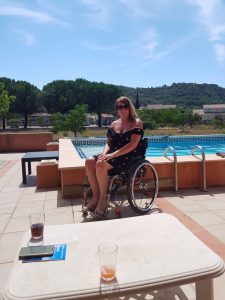 During a family holiday in Spain in 2016, Tina was involved in a road traffic accident. The vehicle she was travelling in was hit and Tina sustained life changing injuries. When Tina was brought back to the UK she spent time in Pinderfields Spinal Injury Unit in Wakefield and received daily input from the NHS. Tina was eventually discharged home, to be supported by her husband.

Tina continued with her physiotherapy and through her Case Manager was able to access further equipment to help assist with her rehabilitation. The world was very different place with Tina now being wheelchair bound. When Tina came to MOTIONrehab in February 2018, her goal was to be able to walk again. She was realistic about the chance of this but was also determined to improve as best she could.

MOTIONrehab arranged for Tina to attend hydrotherapy at a facility close to her home, which had hoists and would allow access to the pool as she was unable to stand or get down the stairs. Tina attends hydrotherapy on a weekly basis since September and has made vast improvements, she now accesses the pool with her husband and finds the water gives her a feeling of freedom that she struggles to find on land.

Tina finds that being in the water has a number of beneficial effects including:

Tina has worked alongside the treating therapist to identify and then work on a number of goals in the pool. From her initial session where Tina lacked the confidence to let go of the side or have anything less than support of one and floats, she has managed a number of different achievements.

Tina’s achievements are as follows: 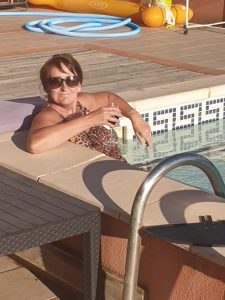 This has resulted in Tina being able to actively take a number of steps on her own whilst holding on to the side of the pool. The work in the pool has allowed Tina to return to some of the pursuits she enjoyed before, in an adapted way. Tina has recently been on her first trip abroad  in a specially adapted apartment. She was able to access the pool and reports she had a lovely holiday, relaxing and spending time with her husband, and family.

This was possible due Tina’s hard work, determination and pursuit of her goals