Rehabilitation following a brain injury can be unpredictable because every brain injury is unique. When brain cells are damaged they do not regenerate. However, the brain and nervous system have an ability to reorganise itself, learn and reshape. This is called Neuro-plasticity. For re-learning to take place movements need to be repeated and practiced just as you would expect learning to play an instrument or take part in a new sport.

During recovery, other areas of the brain take over the activities of the damaged areas and new nerve pathways can be established using undamaged brain cells. Engaging in activity helps these alternative pathways to develop. MOTIONrehab is the only facility in the UK to offer Intensive Neurological Rehabilitation Centre augmented by Robotics and Virtual Reality to facilitate high-intensity/high-doseage rehabilitation to help maximise recovery.

MOTIONrehab are renowned for their person-centred approach to rehabilitation, personalising each individuals therapy to enable everybody to achieve their individual goals and reach their full potential.

For more information about our Intensive Rehabilitation Centre or how MOTIONrehab can help following a brain injury , please call the MOTIONrehab Customer Services Team on 0800 8600 138 or email [email protected] 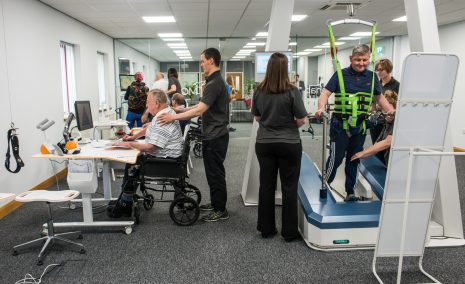 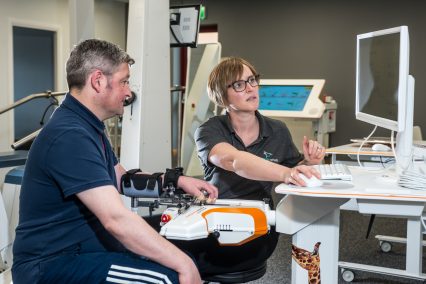 Rehabilitation for the hand, fingers and thumb

ABI is the term used for an injury to the brain. ABI can be classified as traumatic or non-traumatic

Non-traumatic Brain Injuries to the brain that do not involve a traumatic or direct physical impact to the brain. This may include loss or complete lack of oxygen to the brain.

Anoxic brain injuries are caused by a complete lack of oxygen being provided to the brain, which results in the death of brain cells after approximately four minutes of oxygen deprivation

Hypoxic Brain Injuries are brain injuries that form due to a restriction on the oxygen being supplied to the brain. The restricted flow of oxygen causes the gradual death and impairment of brain cells.

The brain is protected and suspended in fluid inside the skull. Despite the hard bony case of the skull a trauma or physical impact to the head can result in damage to the brain. These are usually called Traumatic Brain Injuries, or TBI.

The severity of a TBI is usually measured by the length of time someone has lost consciousness for. Generally speaking the longer the time unconscious the more severe the brain injury.

Rehabilitation is aimed at improving these difficulties so that someone can do as much for themselves as possible at home and whilst out and about.

Drop us an email to [email protected]

Visit our locations page to
find your nearest clinic