Emily’s story so far. Emily was born with Cerebral Palsy, but was able to walk independently, occasionally using elbow crutches for support where needed. Emily was living away from home, studying Geology at University and was fully independent with her daily activities. In 2016 this changed – she had to drop out of University and move back home due to a gradual decrease in her mobility, an increase in pain and spasms and general deterioration of health.

In 2018, Emily encountered further problems resulting in immediate pain and paralysis in her legs. She went into hospital for investigations, where she was eventually diagnosed with a Functional Neurological Disorder (FND). She remained as an inpatient for 7 weeks, however lost the ability to walk.  Consequently, Emily was unable to fully care for herself.

She was discharged from hospital to live back at home with her Mum. She returned home with a full care package and a full hoist to get in and out of bed.

She worked hard with the NHS community rehab team to progress from being confined to bed to using a standing aid for transfers from her bed to her wheelchair.

Due to restrictions with COVID-19 and a plateau in her progression, her therapy with the NHS team came to an end. Her carers continued to perform daily bed exercises with Emily. Her carers also assisted with toilet transfers, washing, dressing and meal preparations.

Emily described feeling high levels of pain in her lower back and legs due to not being able to move as freely. This meant she was taking high doses of daily pain medication to get her through the day. 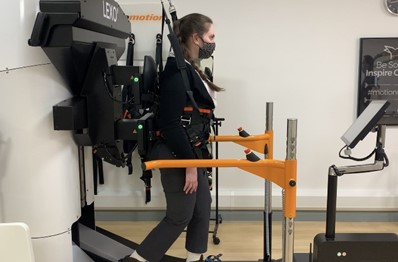 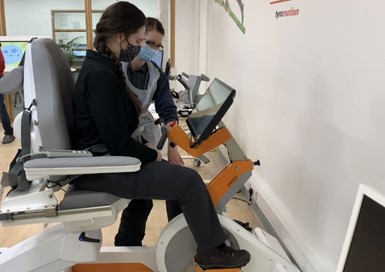 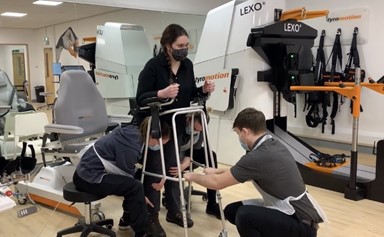 After an initial assessment with MOTIONrehab, Emily expressed that her main issues were that she was unable to toilet herself independently, having to rely on care calls to be assisted on and off the toilet. She had not been out of the house in nearly two years, meaning she felt isolated from society. She felt low in confidence, as she had limited independence in all aspects of her daily life.

Emily’s main goals were to increase her independence around transfers and toileting, reduce her reliance on pain medication, and to increase the activity in her lower limbs. She expressed that she would like to be able to walk with a walking aid in the longer term, as she has done previously whilst at university.

Initially, Emily showed very little active movements in her legs and increased spasticity in her hamstring tendons. She was unable to bend her knee unless great force was used by carers, which caused pain and discomfort. She was able to stand by pulling up on the bar of the standing frame but was unable to push herself up from her wheelchair or bed.

After working with Emily in her home environment for a few weeks, she was able to show an improvement in small tasks, such as taking her footplates on and off her wheelchair. She was also able to transfer herself from bed to wheelchair, without the use of a large standing frame or heavy assistance from carers.

She started taking control of her exercise programme, being actively involved in moving her legs with the help of carers. Emily was able to transfer herself on and off the toilet with minimal supervision from carers, enabling her to get closer to her goal of being independent with toileting. She went outside the house for the first time since discharge home and demonstrated successfully transferring into the car.

After making significant progressions with her therapy goals, it was decided that Emily would make the journey to MOTIONrehab’s Outpatient Neurological Rehabilitation Centre in Hull. She would then be able to utilise a combination of hands-on Neurological Physiotherapy and also access the new robotics suite, offering robotic assisted rehabilitation exercises augmented by virtual reality and immersive application of movement. She increased the frequency of her therapy to twice weekly to focus on achieving her goals.

Whilst at the clinic, Emily has been supported to use the robotics, including the LEXO, working on increasing her standing and mobility, as well as replicating a normal gait pattern. In three sessions, she has managed to double the number of steps she can achieve, has increased her time walking, and has reduced the amount of assistance needed to stand up.

Emily has also used the OMEGO lower limb rehabilitation device, working on reducing tone and spasticity in her legs, as well as building up her exercise tolerance and cardiovascular fitness. She has demonstrated the ability to activate a variety of muscle groups in her legs, and has focused on strengthening these, through focused assistance from the machine.

Emily has also been working on mobility practice with a gutter frame, working on bed mobility, standing tolerance and selective movement control around her lower limbs.

As Emily has shown such significant improvements in her therapy, she is due to commence her first Intensive Rehabilitation Package at Hull.

She will continue to work closely with the team to build her strength, increase her lower limb range of movement, and to further develop her functional activity. She will work to further increase her exercise tolerance with a view to achieving her goals of greater independence with her daily activities and move closer to her goal of walking again

MOTIONrehab will keep you posted on Emily’s progress, keep an eye out on our website and  Social Media channels to see her progress. 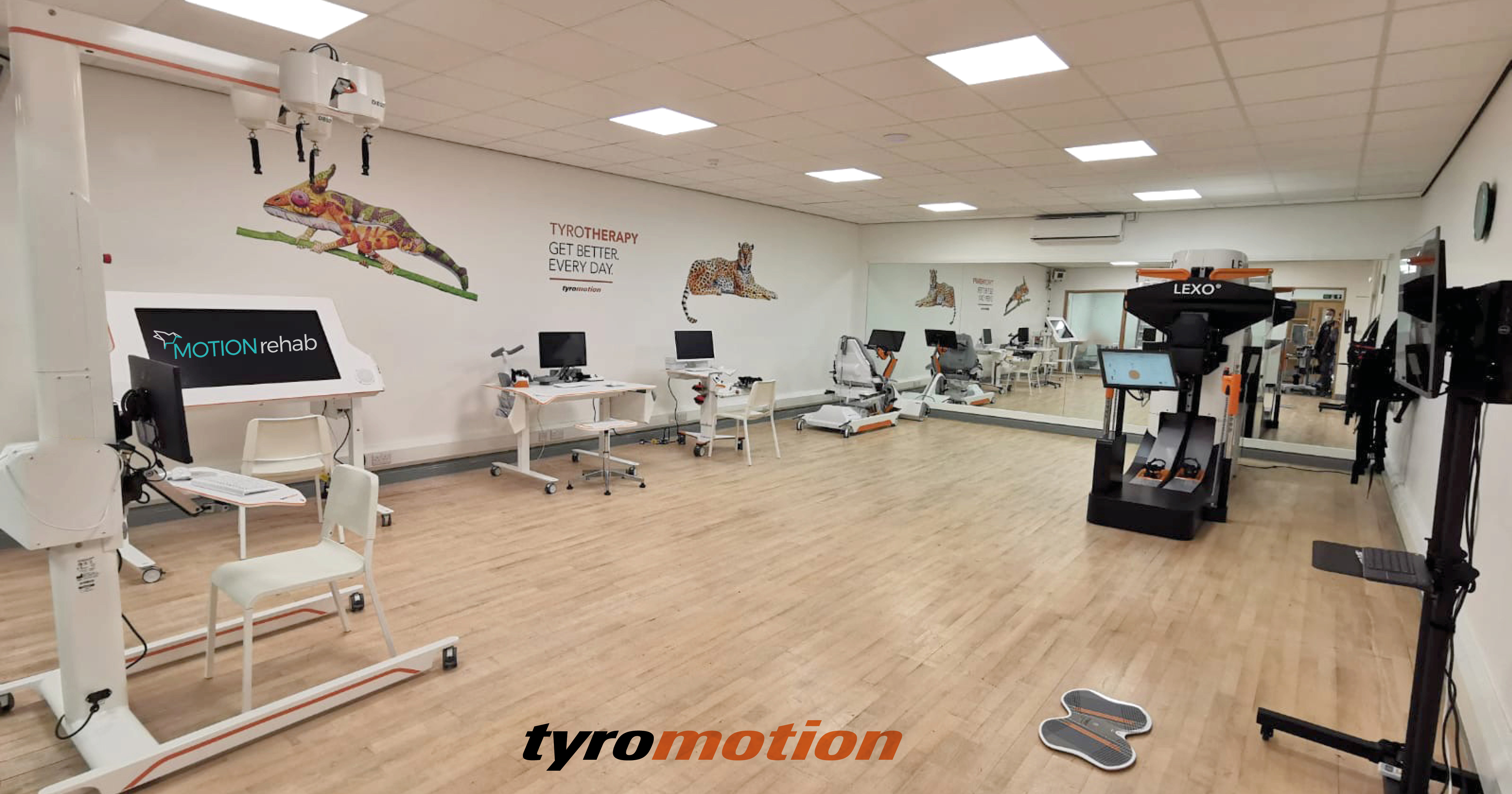