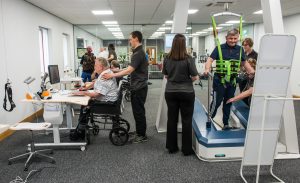 A major new study overturns the medical consensus that three to six months after stroke little can be done to improve a stroke survivors ability to carry out every day tasks such as getting dressed independently. The ground break study found that significant improvements can be made in the arm and hand for at least 20 years post stroke.

The previous medical consensus meant that stroke survivors received little or no therapy from the NHS after the first few months, often being told that they were ‘as good as they were going to get’. Some patients then went on to fund their own private rehabilitation through companies such as MOTIONrehab and continued to make significant improvements.

Now Britain’s 1.2 million stroke survivors have been given hope of recovery. Furthermore, the researchers found that survivors are able to tolerate – and benefit from – much greater doses of therapy than they get at the moment.

“This is potentially a game-changer and I’m really excited about it……All this talk about the window of opportunity shutting within which you could recover is nonsense,” he said. 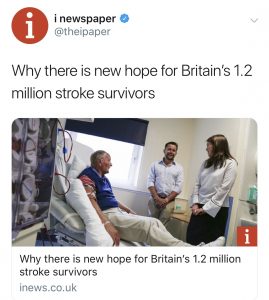 The study involved 238 stroke survivors between three months and 20 years after their stroke. It found that, in some cases, the therapy made the difference between being able to carry out everyday tasks such as tying back their hair or dressing themselves – and not. This, in turn, can make the difference between being able to live independently or being dependent on others for at least one aspect of their daily care, according to Prof Ward.

Prof Ward and others stressed that more studies are needed to confirm his findings and to determine which kinds of therapy would be most effective. He hopes these will lead to therapy being available for long-suffering stroke survivors in at least some specialist clinics with five years.

For now, he advises:

“stroke survivors to pester their GP for some top-up therapy. All stroke patients are eligible for this but most don’t know about it – and unless you push for it you won’t get it,” he says.

The research is published in the Journal of Neurology, Neurosurgery and Psychiatry.

To read the full article in iNews: https://inews.co.uk/news/health/why-there-is-new-hope-for-britains-1-2-million-stroke-survivors/