Ron had a hemorrhagic stroke in October 2015. On discharge from hospital he received treatment from the Community Stroke Team 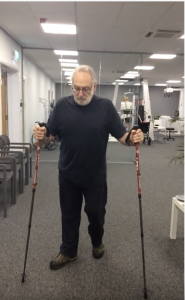 and also had some private physiotherapy. Ron came to MOTIONrehab’s Intensive Neurological Rehabilitation Centre at the end of April 2019 to undertake an intensive neurological rehabilitation programme consisting of four hours of therapy a day for four days a week.

Working alongside the MOTIONrehab team Ron identified the goals that were important to him and that he wanted to work on during his intensive neurological rehabilitation programme. Ron was keen to improve his walking and his overall confidence with daily activities. During his time at the centre Ron had one-to-one hands-on specialist neurological physiotherapy as well as also spending time training with the robotic, sensor based and virtual reality devices every day. These devices enabled Ron to practice high repetitions of movements which is critical to promoting the rewiring of the nervous system known as neuroplasticity. This helped to optimise Ron’s outcomes.

In Ron’s more traditional hands-on neurological physiotherapy sessions he worked on strengthening his right side, balance work, and confidence building. Ron also had Functional Electrical Stimulation (FES) trials to support with lifting the foot during walking.

As well as traditional manual walking, Ron practiced his walking on the Thera-Trainer LYRA. The LYRA helped to achieve an increase in cardiovascular fitness as well as an improved walking pattern. The graph below shows a significant increase in the distance covered. By the end of the package, Ron was able to increase walking speeds as well as reducing the additional supports due to increased strength and control of his right leg. 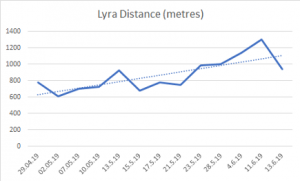 Ron also used the Thera-balance Trainer BALO to practice standing and more dynamic challenging tasks. The below graph demonstrates a significant improvement in Ron’s ability to transfer weight more freely in all directions. The initial assessment (in blue) shows a reduced ability to transfer weight away from his weaker side, however, this significantly improved. This further translates into improved balance, walking and reduced risk of falling. 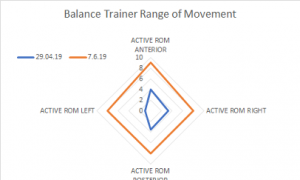 By the end of Ron’s Intensive Neurological Rehabilitation Programme, Ron was mobilising consistently with high walking poles and reported significant improved confidence in his daily activities.  Ron now continues to work on his rehabilitation at home alongside a personal trainer. Ron reports that he is able to access the community more easily and feels he more confident in with his balance and walking.

Please see the graph below demonstrating the comparison of data from initial assessment to the end of Ron’s Intensive Neurological Rehabilitation Programme. 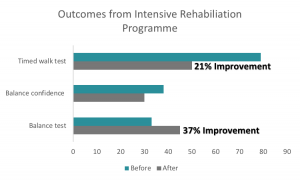 MOTIONrehab’s Intensive Neurological Rehabilitation centre includes a range of upper and lower limb robotics and virtual reality technology by Tyromotion and Thera-Trainer. The MOTIONrehab centre is the only location within UK with all of these particular devices, giving the clinic International Reference Centre Status for treatment, teaching and research.

For more information about MOTIONrehab’s Intensive Neurological Rehabilitation Programmes or to book an assessment, please call 0800 8600 138 or email: [email protected]